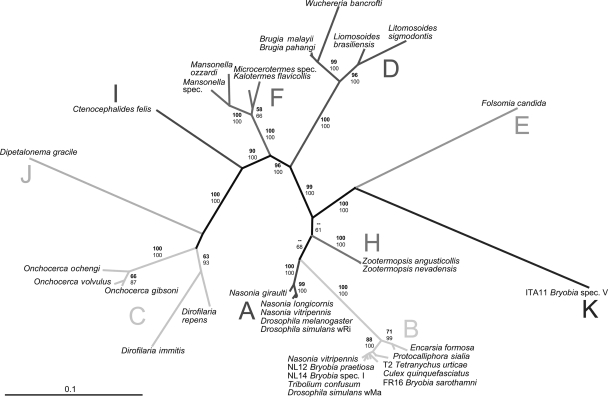 At least 20% of all arthropods and a few nematode species are contaminated with intracellular micro organism of the genus Wolbachia. This extremely diverse genus has been subdivided into eight “supergroups” (A to H) on the foundation of nucleotide sequence information.

Here, we report the discovery of a new Wolbachia supergroup recovered from the spider mite species Bryobia species V (Acari: Tetranychidae), primarily based on the sequences of three protein-coding genes (ftsZ, gltA, and groEL) and the 16S rRNA gene.

Other tetranychid mites possess supergroup B Wolbachia strains. The discovery of one other Wolbachia supergroup expands the identified range of Wolbachia and emphasizes the excessive variability of the genus.

Robust delineation of supergroups is important for understanding the origin and unfold of this widespread reproductive parasite and for unraveling mechanisms of host adaptation and manipulation throughout a big selection of hosts.

Exome sequencing identifies FANCM as a susceptibility gene for triple-negative breast most cancers.

In Finland, founder mutations have been noticed in every of those genes, suggesting that the Finnish inhabitants could also be a wonderful useful resource for the identification of different such genes.

These findings establish FANCM as a breast most cancers susceptibility gene, mutations during which confer a notably robust predisposition for TNBC.